Achiever Of The Heart Of Lothian 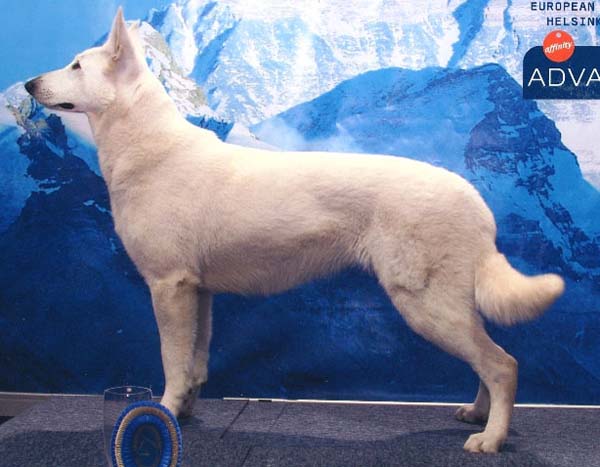 Achiever is now 2 years old and is showing what she really is worth of! She is a real Achiever! I could never imagine that I am going to own an European Winner:) Although, we did not have success at shows long time when she was young at some point she just decided to become a Star. After several months bad results from shows she achieved Baltic Junior Champion title in three weekends with winning first weekend in Estonia, next weekend three shows in Lithuania and third weekend in Latvia where she also took BOG 5 place. Since then she has been a real Star in every show. Her greatest achievement is the victory in high competiton EUW06 dog show in Finland where she achieved European Junior Winner 2006 title. Nevertheless, it’s not the highest competition dog show she has attended:) Also with very high competition dog show was in FINW05 show where she won Finnish Junior Winner 2005 title and additionally Best Female 2 place. On the top of all that, she also won Baltic Junior Winner 2006 title in Estonian BALTW06 show. We were attending in the World Winner 2006 dog show in Poland among of 93 other White Shepherds participating and Achiever got 4th place in Intermedia Class! And she just keeps gaining results. She has got CAC from Latvia and CAC from Lithuania which together with her last CAC from Estonia makes her Estonian, Latvian, Lithuanian and Baltics Champion. What else can we wish!? Basically, we had achieved all we had ever dreamed of from dog shows and concentrated on working and set our goal to achieve this year with Achiever KK1 result. Which we also fullfilled in April when Achiever passed the KK1 exam with result very good.

Achiever came to us from Netherlands repeat mating from where I wanted to take puppy even before I found my beloved Almighty. From earlier mating I could not get a puppy because it was one of the best matings in Europe and the litter was fully booked. And no matter that I found my Almighty I asked to add me to the waiting list for next mating from the same parents. I was waiting for the puppy about 2 years and finally she arrived into Estonia to live with us!:) Achiever is from very interesting mating. Achievers mother is World Winner 2002, World Junior Winner 2002, Netherlands Winner 2002 and Netherlands Junior Winner 2002, and multi Dutch shows won dog born in Denmark from Danish breeding. Achievers father is multi Dutch winner, successful Agility competition dog, very good breeding male with very good and healthy offspring born in Germany from German breeding. From the same litter went also other dogs for breeding to South-Africa, Brazil and Finland. We got a very beautiful female and we are soooooo happy to have her in our family!:)

Even though some people named her in puppyhood “Ugly Duckling” when she had her growing period and sometimes her legs were too long and then her head was too small etc. I never lost faith in her but patiently waited when she will be finally developed. And she “paid me back” for all my trust and become one of the Greatest Star around:)))) Our highly Beloved Achiever is The Real Achiever! Thank you Alma Groot for such a beautiful dog!