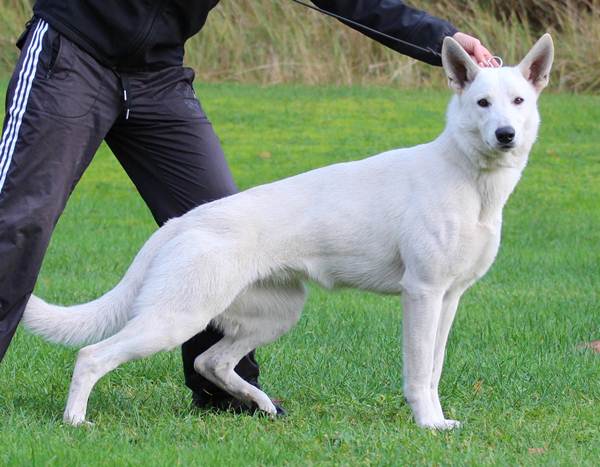 The Nightmare’s father is origin of Germany Finn vom Sutumer Grund whom I first met in the end of year 2007 in Germany is a very nice young boy with full of energy and lots of play drive and will to work. When I met him again in 2011 at the mating time I liked Finn even more just because of his bursting energy and will to fight. Finns working results are VPG 1 and SchH 2 and IPO3 with TSB-a. His fathers Bossanovas working results are SchH 3, IPO 3 and VPG 2, and Finns mothers father Einstein Tyson vom Sutumer Grund working results are SchH3 and IPO3. Additionally to that in regards of dog shows Finn is German Champion and Austrian Junior Winner 2007, Austrian Winner 2010 and Austrian Junior Champion. His father Bossanova von White Angel is Veteran World Winner, German and Swedish Champion and Finns fathers father Baron vom Schloss Stutensee is World Winner 2003.

BTWW Nightmares mother the BTWW Gatekeeper KK3, BH, AD is sister to our famous BTWW General FH1, PJK2, KK3, BH, AD and also out of combination of our Almighty and Herakles which both were our best charactered dogs which we had bought from other kennels. With Gatekeeper we have got white shepherds character and working ability in our kennel to the next level. Gatekeepers mother Almighty is our pack leader with her stronger and very dominant character. She has got excellent anatomy and very good will to work. She is the kind of dog you would say “has got a personality”. And Gatekeeper has taken from her mother a lot. Maybe a little less dominance, better bite and higher energy. And certainley showing her personality too 🙂 Gatekeepers father is our Herakles who has given characterwise quite good offspring with different females. Gatekeeper has got right now KK3, BH and AD working results and has been participating in obedience competitions. Gatekeeper has also been quite successful on dog shows and has got right now Estonian and Latvian and Lithuanian, Baltics and Russian Champion and Junior Champion titles 🙂

BTWW Nightmare has got via parents quite strong character combination and we are really hoping that the outcome of this will be good working potential. The litter BTWW Nightmare is out from was not meant for dog shows but made purely for getting working character.

Lets see what the future brings us 🙂