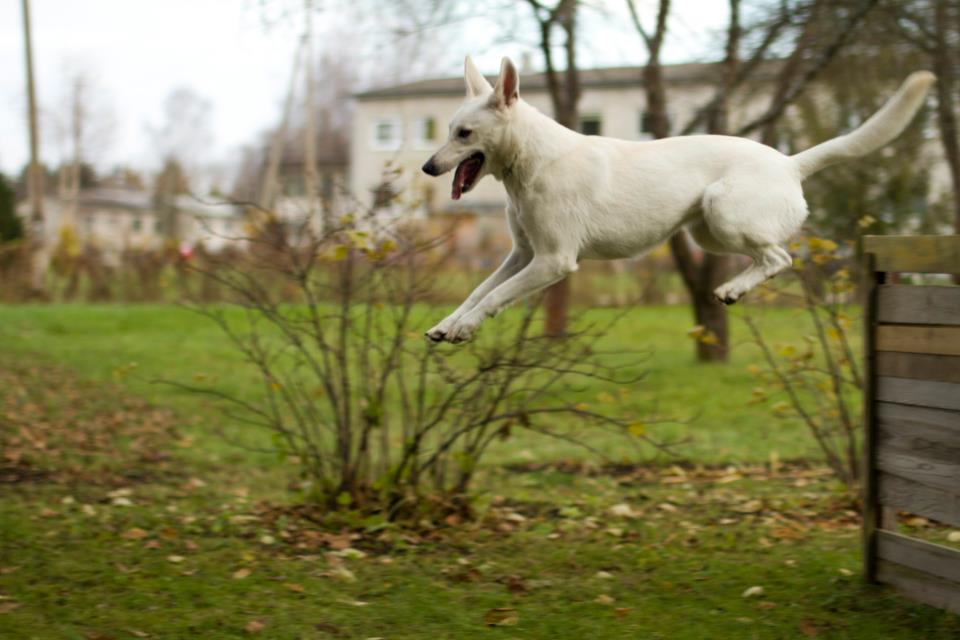 Fenna is out of our own BTWW General born in Germany in kennel vom Haus Eckenfels whom we brought into Estonia. At some time we had a trip to Germany to search new bloodlines into our kennel. We actually had an agreement to take one of our Fennas mothers Attikas puppies with one of our selected male. However, I think its something like faith as our selected male was just a month before the mating time taken off from the breeding. So Fenna’s breeder turned to us for asking to mate her Attika with our General. It seemes that our destiny is incorporate our General strongly into our breeding. Well, ofcourse we agreed and I believe it was a very wise decision as the puppy seems to be quite good at the time being. This time we were after the pedigree as the female has a nice strong pedigree. Fennas mother Attika itself is very strong in tracking and has got by today results FH2, FH1, FPR1, IPO A+B and BH. Additionally, she is not afraid of gun shots and has got lots of drive. Attika has been 2-3 linebred to one of most famous working white shepherds Attila-Roy vom Neckarursprung who was a very successful competition dog in Germany. Attila-Roy vom Neckarursprung had working results SchH3, IPO3 and FH2 and was Deutscher Jugendmeister 1993, Deutscher Jugendmeister SchH1 1 place (dhv-Deutsche Meisterschaft 1993) with 294 points and Deutscher Jugendmeister SchH3 3 place (dhv Deutsche Meisterschaft 1994). Attikas father Apollo von der Wolfsschlucht SchH3 dog was one of the old time dogs I really fell in love with whose father was the before mentioned SchH3, IPO3, FH2 Attila-Roy vom Neckarursprung and whose mother was IPO3, SchH3 Liesa von Schloß Stutensee. Attikas mother is VPG 1, FH 1, FH II, BH Prinzess vom Neckarursprung whose mothers side grandfather was again the before mentioned SchH3, IPO3, FH2 Attila-Roy vom Neckarursprung. Attikas mothers father is SchH1, IPO2 Bandit of Moonlight whose father is SchH3, IPO3, FH1, AD Condor von der Hohensyburg. The lines itself go back to the German oldest dogs such as Pilar Lady von Ronanke and Champion von Kron as kennels von Ronanke and von Kron were the foundation kennels in Germany. Fennas father is our own bred Born to Win White General who is our kennel most successful working dog achieving already by the age of 2 years old working results such as PJK2, PJK1, KK3, KK2, KK1, BH and AD. PJK2 was achieved on Estonian German Shepherd PJK Championship 2010 where we got PJK2 1 place. PJK1 was achieved also from a competition where we got PJK1 3 place 🙂 And it seems that our General gives to its offspring quite a lot of character which can be seen already in his daughter BTWW Almighty and seems that also Fenna has inherited from him quite a lot 🙂 Fennas father Generals mother is our KK3 LTE+172 Almighty who used to be Monikas competition dog before General and who is the most strongest character dog in our dog pack. Generals father is our KK2 BH Herakles who was our first successful white shepherd in protection field. So we have quite high hopes for this small creature named Fenna 🙂

Lets see what the future brings us 🙂